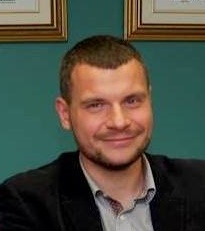 Dr. Piotr Kajak, assistant professor at the POLONICUM Centre of Polish Language and Culture for Foreigners, Faculty of Polish Studies, University of Warsaw. Teaches Polish as a Foreign/Second/Heritage Language.

Lectured at universities: Comenius in Bratislava, Leipzig, ELTE in Budapest, in Potsdam, in Barcelona, in Vilnius, Eberhard Karl in Tubingen, in Glasgow, in Ostrava, in New Delhi, in Calcutta, in Manipal, Kyungpook National University in Daegu, Sichuan in Chengdu, SISU in Shanghai, GDUFS in Guangzhou, Charles in Prague, and Sorbonne in Paris.

Expert of the Polish National Agency for Academic Exchange. Since 2006 member of examining boards of the State Commission for the Certification of Proficiency in Polish as a Foreign Language, Ministry of Science and Higher Education.”

Centre of Polish Language and Culture for Foreigners
p.kajak@uw.edu.pl